One of the first steps in the Stack Overflow .NET Core migration was to extract a Common library that would target netstandard. This new project would be referenced in both the old ASP.NET MVC 5 as well as the new ASP.NET Core projects, so that we could start moving the old projects one-by-one. We ended up targeting net462 for ASP.NET MVC, and netcoreapp2.2 for ASP.NET CORE. The new Common project had a few ASP.NET MVC / ASP.NET Core specific regions that were conditionally compiled via #if NET462 <MVC 5 CODE> #else <ASPNETCORE CODE> directives (thanks to the new IHtmlContent interface which replaced the old IHtmlString from System.Web, which we use across many models). The target framework moniker conditional defines are a feature of the new SDK-style builds in the .NET Core ecosystem. (Note, that switching on the TFM works for us because we don’t plan on running ASP.NET CORE on the full framework - it might not work for you…)

Everything built fine and dandy locally, but the fun started once we promoted our branch to a PR and the automatic build checks we had in place in GitHub / TeamCity kicked. No matter what we did, we only ever got into one branch of the conditional compilation; the other one was seemingly disregarded. My team spent around 2 days throwing WTFs around, and trying to figure out what was going on. Ultimately we started digging into the MSBuild code that powers the multi-targeting builds.

The magic code that introduces the target framework defines lives here, and at first glance everything seemed to be in order, and nobody from our team spotted what’s going on. So, I started comparing what our CI build does differently from our local build (which worked fine). Finally I managed to repro what’s going on, by including an additional -p:DefineContants=WHATEVER on the msbuild command-line, locally. Our CI PR verification build was passing a conditional compilation symbol in order to speed up the build a bit (we have one that enables us to localize for English only, which means a lot less IO) Next, I compared the MSBuild binlog (you can get one by running MSBuild with the -bl switch), and used the excellent MSBuild Binary and Structured Log Viewer where I searched for DefineConstants. The failing case turned out to short-circuit on whatever was passed in the command-line switch (e.g. WHATEVER), and never re-evaluated the property. Lucky for me, the binlog contained a hint as to why this is happening; the DefineConstants property was under a “global properties” node in the tree. Once I googled for “MSBuild global properties” I got to this piece of doc fairly quickly.

In the end the TIL was: if a property is a global property, and you pass it to MSBuild via command-line args, the value passed in is used, regardless of what your build scripts do.

I’ve came up with a trivial example to explain to the team, what was going on in MSBuild: 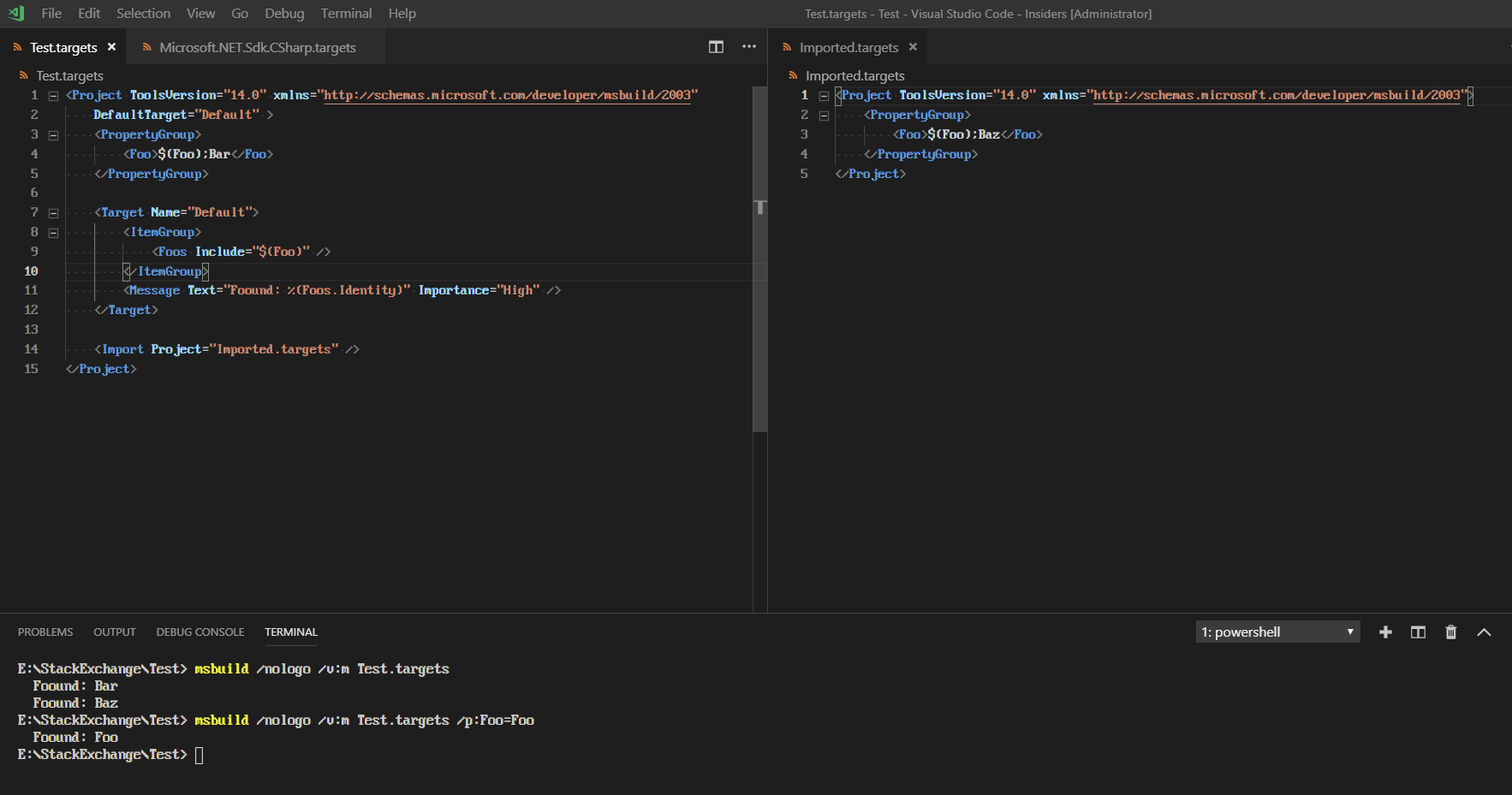 I’ve also opened up an issue in the DotNet SDK, since using a global property for the multi-targeting part makes the whole thing very brittle, and I’d expect some defensive programming around that.