In this article we’ll wrap the [StringBuilderInterpolationOptimizer](https://gist.github.com/m0sa/f086bb0e9f62e05995c6#file- stringbuilderinterpolationoptimizer-cs) from my previous article into an [StackExchange.Precompiltion](https://blog.stackoverflow.com/2015/07/announcing- stackexchange-precompilation/) module, and use it to optimize an existing C# project.

First things first, we start off with an empty console project, to which we add some sample StringBuilder.Append calls, passing interpolated strings as parameters:

Now, let’s add the StackExchange.Precompilation.Build package to our demo project, and make sure it still builds. This package replaces csc.exe with a custom and hookable compiler, which is basically a wrapper around the roslyn API. Unfortunately, roslyn doesn’t expose any hooks for adding custom processing from the command line (yet). Luckily the API let’s you do all kinds of crazy stuff, it even comes with a parser for the csc.exe command line arguments…

After this package is successfully installed, you should see the precompiler executable being called instead of csc.exe in the build output window: 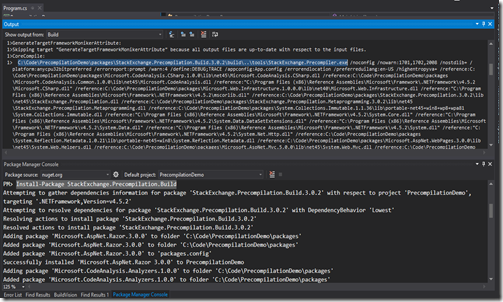 Next, we need to build the compilation module that can be loaded into the compilation. So we create an empty class library, and install the StackExchange.Precompilation.Metaprogramming package (contains all the required base types). 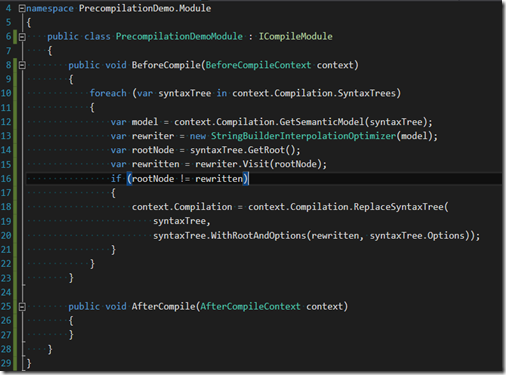 All that’s left to do now is to wire up our shiny new compile module, so it’s picked up as by the compiler. This is done in the app.config (or web.config for ASP.NET project) file of the console application:

The modified build script forwards the project’s config file to the compiler (this is especially useful when it needs to actually precompile razor views, but this is out of scope of this post). Also, be sure to add the precompilation module as a project reference to the console application.

After everything is set up correctly, a quick build and decompilation can verify that the emitted assembly contains optimized string builder calls: 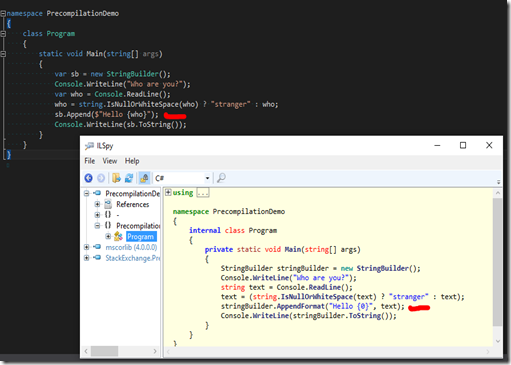 The sources for this demo, along with commits reflecting the described steps, can be found on GitHub.

P.S. a useful trick for debugging your compilation module is to add a Debugger.Launch() call to attach your current VS instance to the currently executing compilation.